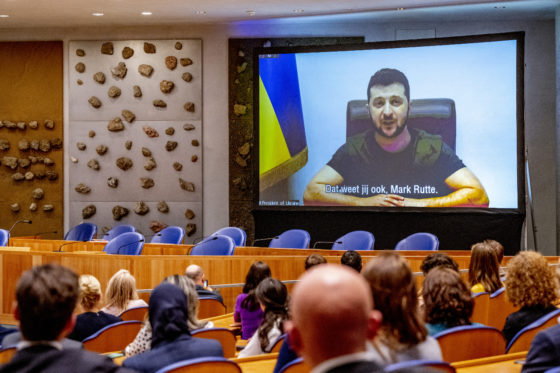 The Ukrainian president didn’t mince his words in his speech to parliament. Photo: ANP/HH/Robin Utrecht

[Apology: unfortunately this week’s recording was disturbed by occasional drilling noises. We have passed the workman’s details on to Maurice de Hond.]

Ukrainian president Volodymyr Zelenskyy was the toast of Brielle this week as he commemorated the 450th anniversary of the town’s liberation from Spain. In his address to the Tweede Kamer he also called on the Dutch to send more weapons, stop buying Russian gas and lift the handbrake on his country’s wish to join the EU. Zwolle is in shock after a double fatal shooting in McDonald’s while families ate dinner. The long-running campaign to create a legal supply chain for cannabis cafes hits the buffers again because of a shortage of growers. Oranje warm up for the World Cup by beating Denmark in Christian Eriksen’s first international match since his cardiac arrest. And we reveal which lucky patron is receiving Paul’s historic red pencil.

Russian diplomats expelled from The Hague for alleged espionage

Blow for plans to regulate marijuana cultivation as growers stay out