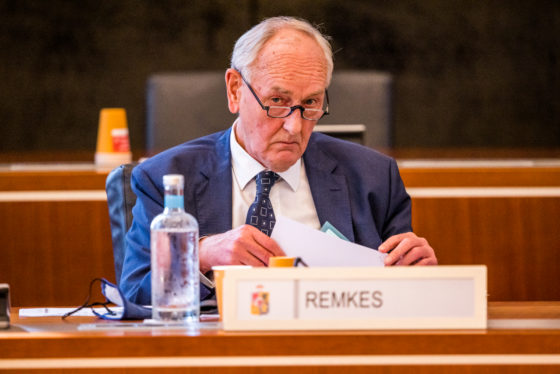 Johan Remkes will try to break the deadlock in the coalition talks. Photo: ANP/Marcel van Hoorn

There are three levels of crisis in the Netherlands: moderate, severe and ‘call Johan Remkes’. The self-styled Plumber of Groningen has given himself a month to unclog the blockage in the coalition negotiations, which has grown fatter this week following Sigrid Kaag’s gossamer-veiled attack on Mark Rutte. Despite warnings from viral experts that coronavirus infections are set to rise as we move into autumn, Hugo de Jonge still plans to relax the pandemic restrictions later this month. There’s plenty of sporting success to cheer as Max Verstappen triumphs at Zandvoort, the Paralympic team comes home with a sackload of gold medals and Memphis Depay bags five goals in two matches for Oranje. And the podcast’s own four-legged mascot became an unlikely celebrity after his expensive tastes went viral on Twitter.

Ophef of the week: Trouby’s cheesy treat tweet makes it into Newsweek

I just walked into the kitchen to discover my boyfriend grating cheese directly into the dog’s mouth.

‘No internationals’: Foreign students struggling to find a place to live

King must choose between hunting and subsidies at Het Loo palace

Interview: ‘The Netherlands is the ideal environment for the international drugs trade’