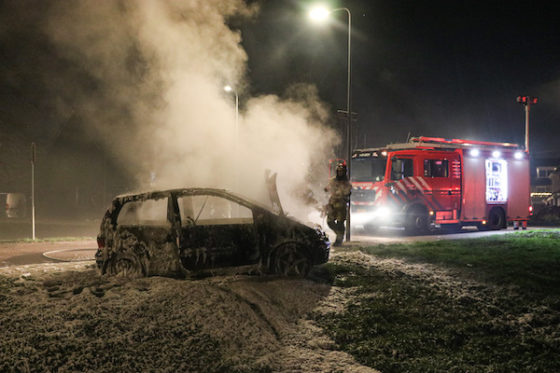 The fire brigade put out a burning car on Urk. Photo: GinoPress via ANP

If it had been the children of immigrants throwing fireworks at police, rather than youngsters in several Bible belt villages, the response would have been very different, says Leiden University professor Leo Lucassen.

The events on New Year’s Eve and the days leading up to it demonstrated yet again that double standards are still rife in the Netherlands. Many criticised the Urker youngsters for going on the rampage but the explanation that was given for their violent and destructive behaviour was that it stemmed from a centuries old ‘tradition’ of rebelliousness against authority. In short it was ‘our’ national character that had been on display here.

If similar violence had taken place in areas with a large percentage of Dutch with a migrant background, all hell would have broken loose, not on the streets but in the media. Papers and talk shows would have been full of learned musings about the failed integration of Turkish and Moroccan Dutch in particular, citing their ethnicity and religion as causes.

This was clearly not the case in Duindorp where hundreds of locals welcomed the New Year by flouting the coronavirus measures on the Tesselsplein where ‘a jolly atmosphere was created by singing along to Dutch tunes à la Tino Martin,’ according to the AD.

Most people on social media disapproved of the event but it was generally reported as a nice get-together for young and old in a close-knit neighbourhood. And no doubt it was. But just imagine if it had taken place some five kilometres to the southeast, in the Schildersbuurt.

These examples show that not only do we require migrants to abide by a completely different set of rules, but that our thinking has become submerged in what expert Peter Geschiere calls ‘autochtonity’. The term refers to group thinking based on a perceived ethnic identity which excludes others, and which has become widespread in Europe as well as the US, Africa and Asia in the last 20 years.

The fixation on ethnicity has shown itself as a source of exclusion and racism the world over. It makes us lose sight of the fact that there is much more that unites us than divides us. Ethnicity is just one of many identities and often not the most important one, as Nijmegen-born anthropologist Sinan Çankaya’s analysis in the excellent My Innumerable Identities shows.

The fact that we place such importance on a person’s ethnic background cannot be separated from post-war immigration and the Dutch colonial past. That politicians and media are continuing to breathe new life into the contrast between ‘us’, the ‘real’ (white) Dutch, and ‘them’, the newcomers and their children is much more problematic.

Right-wing populist parties are particularly prone to this. It started with Joop Glimmerveen in the 1970s and Hans Janmaat some time later. Both advocated an ethnically homogenous (‘white’) society. In the 1990s their brand of politics was embedded much more generally and deeply as Pim Fortuyn and Geert Wilders gained support.

From the poor to migrants

In some ways, ethnic identity politics is nothing new, except that the emphasis has shifted from the (native) poor to migrants. It’s not that long ago that the native poor were thought of as the most important problem in society. Until after the end of the war ‘the social question’ was completely home grown

Excessive and deviant behaviour in working class neighbourhoods, such as Duindorp, were attributed to the anti-social character of the poor. In the 1950s the authorities in the big cities did their utmost to re-educate them in separate little neighbourhoods under the control of social workers, or in camps in the north of the country.

Although disdain for (white) people with a low level of education or income has certainly not disappeared – think of the term ‘tokkies’ – ethnicity has become a much more common dividing line.

Institutional racism, such as the childcare benefits scandal, and ethnic profiling are just two of the most serious consequences. But the damage to society is not limited to the discrimination of newcomers to this country. It also stands in the way of the solution of a much bigger problem: that of social inequality.

If politicians are really serious about creating a just and inclusive society they must break with populist ethnicity politics and the scapegoating that goes with it.

The gesture politics towards white Dutch which is the trademark of Wilders and Baudet may give them the illusion of ethnic belonging but will, in the end, only feed their resentment and will not resolve their real problems.

This column was published earlier by RTLNieuws.nl