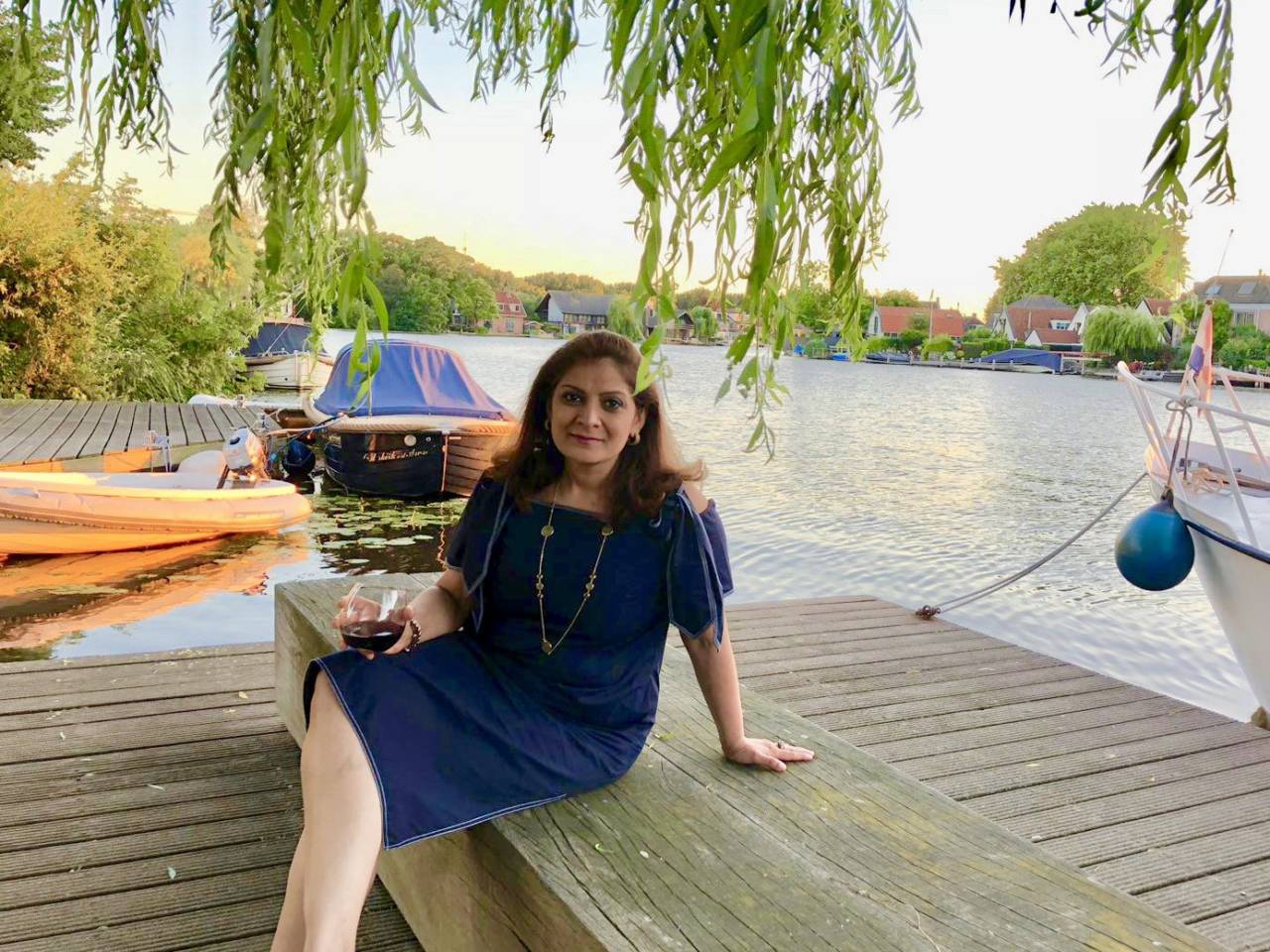 Sheetal Shah originally moved to the Netherlands with her husband while she was finishing her PhD and pregnant with their second child. She now lives in Ouderkerk aan de Amstel, teaches psychology at Webster Leiden, and works with Bridge 2 Hope, an organisation that helps the victims of human trafficking.

How did you end up in the Netherlands?
I was born and brought up in Mumbai and I moved to the Netherlands 12 years ago as a trailing spouse. My husband was working at ABN Amro and then he joined their global team. At the time, I was completing my PhD and was working, studying, volunteering, was a mother, and was soon to be a mother to a second son. I thought we would come to the Netherlands, I would finish the PhD, and we would eventually move back, but that never happened.

How do you describe yourself – an expat, lovepat, immigrant, international?
This is a very interesting question because this has been a journey for me. I moved here as an expat but I’m very often referred to as an immigrant as well, until I prove otherwise and have a discussion about it. I don’t see anything wrong in that.

How long do you plan to stay?
I think we’ll be here until the children go to university because both of them are in secondary school. I wouldn’t want to uproot them at this stage. So we know we’ll be here until then. After that, for me personally and professionally, my plan would be to work in the field in any country with a great opportunity. I consider myself an international psychologist.

I do think that bringing together what I love doing, which is my work in the field of human trafficking, and using it with my background in psychology, I would be able to add value to these projects in different parts of the world.

Do you speak Dutch and how did you learn?
Een beetje (a bit). I always start with that. I try to get by at least at the farmer’s market in Dutch. Very often, I joke that I speak Dinglish, which is Dutch and English combined. I find myself infusing my English now with Dutch words and a Dutch accent. Two things though, medical and legal conversations, I never do in Dutch. I prefer to do those in English.

I learned Dutch as part of an expat relocation programme and I took lessons. I think that I learned a lot as well by speaking to people in the village where I live.

What’s your favourite Dutch food?
I come from India and food defines us. When I moved to the Netherlands, it took me a while to understand what is Dutch food. Over the years, I’ve learned that it’s not just only bitterballen, a borrel, or stamppot. What I love about Dutch food now is the cheese and all the breads that you can get. I absolutely love that and miss it when I’m out of the country for long periods of time.

There’s one type of cheese that I like in particular. I buy it from Clara Maria, a cheese farm on the border of Amstelveen. It’s called Farmer’s Flame. It’s absolutely my favourite and it’s great for anyone who loves a tinge of spice in their cheese. You can buy it as a relatively young cheese or a slightly mature cheese, which will give you more flavour. I absolutely love that cheese and even travel with it. It’s a great present for our friends all over the world.

How Dutch have you become?
As I said before, when I go back to India, I have that ‘outside-in’ perspective. There have been some moments that have defined my Dutchness. One is to make appointments and ask people to respect my schedule. Going back to India on our annual holiday means that our schedule is completely taken over by friends and family.

So we’re going from one point in Mumbai to the next to meet someone else. Insisting that everyone respect the schedule and telling them that this is the time I’ve allocated for each gathering is really being Dutch but it’s not usually acceptable in Indian culture.

Another part is more of a family thing. It’s opening presents. In the Netherlands, it’s a tradition when you open a present to do so right in front of the person who gives it. In Indian culture, it’s more polite to say ‘thank you’ and open it afterwards and not express if you like it, don’t like it, or even have it.

So all these cultural nuances really define my Dutchness now and I’m also more direct. While Dutch directness is often criticised, in my conversations I have now started being more direct instead of more diplomatic like I would have been in the past.

Which three Dutch people (dead or alive) would you most like to meet?
Anne Frank: She’s the first one I would pick. I don’t know if you can call her Dutch since she was born in Germany and she was stateless while she was here in the Netherlands.

The reason why I choose her is because I work with an organisation called Bridge 2 Hope. We work with men and women who are the survivors of human trafficking. They’ve been marginalised, as were so many Jewish people during the Holocaust. I would love to meet Anne because, even as a child, she was able to express that experience so beautifully in her words. I wish I could meet her to learn more about her and her motivations for writing about all of these difficult experiences and trauma.

Vincent van Gogh: This is based on my background as a psychologist so I would love to meet him. I had the opportunity to visit the Van Gogh Museum in Amsterdam recently and see the Van Gogh in Japan exhibition. Every time I go there, I spend time in the section when he was hospitalised and he did all those paintings towards the end before he died.

I would love to meet him so I could work with him. I hope that, if he had been born at this time, he could have been better helped with his pathology than he was during his time. You can see his pain in his strokes and the melancholy in these artworks.

Geert Wilders: I work with people who are marginalised and it’s my belief that, speaking as an international, we stereotype people because we don’t know them well enough. That ignorance can very easily become hate. So I wish I could meet him and discuss the long lasting implications of what he is doing to a country that otherwise has been very different than what he believes it to be.

The fear he has been able to instill in people is an unfortunate but clever strategy. I would want to help him understand what the world would look like if there were many more people like him, and what has happened in the past when people have been able to exploit such hate.

What’s your top tourist tip?
I would take them to Ouderkerk aan de Amstel. It’s a little village outside of Amsterdam and it has everything the Dutch love and love to do. It has the river Amstel, and it has a beautiful bakery called Bakker Out that’s over a hundred years old and makes the best speculaas. I think it wins an award every year around Sinterklaas and Christmas.

They could walk along the Amstel, taste cheese at the beautiful cheese farms, and experience being Dutch in the way they like to spend their free time. So, if a person only has one day, I’d suggest that they avoid all the touristy things on TripAdvisor and just choose a Dutch village to visit instead.

Tell us something surprising you’ve found out about the Netherlands.
What really surprised me about the Netherlands is family values. When you think about stereotypes, Asian countries and southern European countries are the ones that are family-oriented. What I’ve seen in a lot of Dutch families is a concept of having dinners together, or celebrating special events and holidays together.

Based on my travels and experiences in Mumbai and elsewhere, this is a night when young people go out and party with their friends, but there were my neighbours, celebrating all together with sparklers. I thought that family values wasn’t an important aspect of life here but it really is.

From a professional perspective, it amazes me that the influence of this small country is so huge, whether it’s engineering, art, or even the field of psychology. I see Dutch researchers all over the world, the work that they do, and the impact that they’ve been able to make. Despite being a small country, it’s made a big impact on the world.

If you had just 24 hours left in the Netherlands, what would you do?
I would like to just buy my favourite bread, sit with my Farmer’s Flame cheese and a glass of good red wine, and sit along on the Amstel river near my home. I would spend my day reflecting back on the last twelve or thirteen years that I was in the Netherlands and what a journey that was.