New Year’s Eve in the Netherlands is celebrated in a most untypical over-the-top way. Here’s list of 10 things you must do to fit right in.

1. Buy fireworks – lots of them and enormous ones – if you have not smuggled them in from Belgium or Eastern Europe months ago. This year you can only buy fireworks on December 28, 29 and 30 – and for some reason, garages seem to be popular licenced stockists.

Start setting off your fireworks well before 6pm on December 31, which is when you are officially allowed to do so. Frighten dogs.

2. Listen to the final 50 or so entries in Radio 2’s Top2000 which, for some bizarre reason, is listened to by millions of people every year and won every year (almost) by Queen’s Bohemiam Rhapsody. And 2018 is no exception.

3. Watch whichever comedian is giving this year’s televised Oudejaarsconference – a long and winding monologue wrapping up the year. This year it is Youp van ‘t Hek on NOS tv.

4. Buy a New Year lottery ticket – in the hope of winning millions of euros. You and 17 million other people.

5. Eat oliebollen and appelflappen – deep-fried dough balls covered in icing sugar and deep-fried apple dough balls. Forget the diet until January 2. Recipes at the bottom of this list.

6. Set fire to a car or two – but only if you live in a village in Brabant or Drenthe where it is tradition, of course.

7. Other rural traditions include massive bonfires made up of Christmas trees and carbidschieten (or death by milk churn) which involves mixing carbide and water in a milk churn and blasting off the lid.

8. Throw a few fireworks at the police and emergency service workers if you are in a car fire, Christmas tree fire or carbide zone. Become one of the 1,000 or so people who get arrested during the New Year celebrations every year. Or one of the hundreds who end up in hospital accident and emergency departments with firework burns.

9. Have a New Year’s Day swim in the sea – along with tens of thousands of others attempting to shake off their hangover.

10. Wear an orange hat advertising smoked sausage company Unox while having your swim. Beware: if you are a pretty girl in a bikini you may end up the Telegraaf newspaper’s new favourite front page pin-up.

11. If you’d like to prove just how integrated into the Netherlands you are, why not make your own oliebollen and appelflappen? 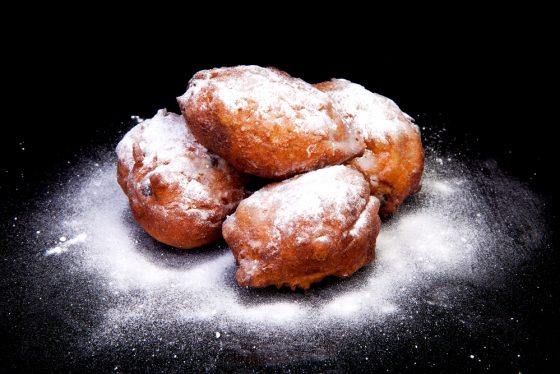 Mix the milk, sugar and yeast and leave for ten minutes. Put the flour and salt through a sieve. Add the egg and the raisins etc. Add in the milk while as you whisk the mixture.

Cover the mixture and leave to rise for an hour and a half on a radiator or some other warm surface.

Heat the oil to 180 degrees. Wet two spoons and make balls of dough and slip them into the oil. Turn after three minutes or so and retrieve after another three minutes. Eat with glass of champagne, or a cup of tea.

Oliebollen without appelflappen are like Laurel without Hardy: still very good but much better together. They say every Spanish person swears his mother’s tortilla is the best in the world and the same is true of appelflappen.

Peel the apples, core them and cut into slices of a thickness of your choice. Sprinkle half of the sugar on them.

Put the flower through a sieve and separate the eggs. Mix the rest of the sugar, the egg yolks and the oil. Beat the egg whites until stiff and spoon into the batter.

Heat the oil to 175 degrees. Cover the apple rings in batter, then put them in the oil and fry until crispy. Leave for two seconds to get rid of the worst grease leakage then cover in a great layer of powdered sugar and enjoy.