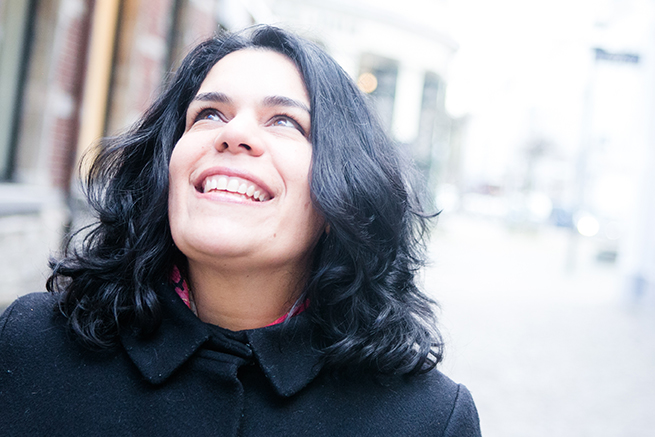 Photographer Vinita Salomé was born in Japan to Indian parents and has lived in the Netherlands for 16 years. She lives in Gouda with her husband and nine-year-old son, would like to meet the members of rock bank BLØF and says she has lost the nuances associated with Asian cultures.

How did you end up in the Netherlands?
I met my Dutch husband at a friend’s wedding in Bombay. He was a friend of the groom. I fell in love and moved to the Netherlands where we ‘settled down’ in Gouda.

How do you describe yourself – an expat, lovepat, immigrant, international etc ?
I’d say I am an international or a world citizen. I speak five languages, enjoy travelling, and hosting family and friends at my home in the Netherlands.

Compared to other Dutch cities, Gouda has less expat traffic and, by necessity, the expats who live here tend to be well integrated. I am a member of the group Living with a Dutchie, which started locally and now has 120 members coming from many nationalities.

How long do you plan to stay and why?
I lived in Japan for 17 years, where I was born, then India for 13 years and have now lived the Netherlands for 16 years. The travel bug has started to bite and it feels like time to move, although we won’t make any concrete plans until we can get our adventure mojo on. I don’t think I’d move back to either India or Japan but moving on is enticing. I like being open to new opportunities.

Do you speak Dutch and how did you learn?
Yes, I do speak Dutch. When I arrived in the Netherlands, integration courses were free and obligatory, so I went back to school full time for a year and later went on to study an advanced language course in Utrecht.

What’s your favourite Dutch food and why?
I would say cheese, although I can only eat a small amount of some hard cheeses due to being lactose intolerant. Stroopwafels are high on my list and also a specialty of Gouda!

Which three Dutch people (dead or alive) would you like to meet and why?

BLØF- the Dutch rock band that I like to listen to.

Leo Vroman – the Dutch poet who left Gouda because of the persecution of the Jews by the Nazis, moved to America but retained strong links with his hometown,Gouda.

MC Escher- I think his self-portraits are simply magnificent and I would have liked to observe him working on these portraits.

How Dutch have you become?
Going back to India for my annual family visit, I realize that I’ve lost the nuances and social protocols that are so prevalent in Asian cultures. I am not direct enough for the Dutch, yet far too direct for the Asians. Using an agenda has become important in my life – but I draw the line at sitting in the circle at my own birthday party.

What’s your top tourist tip?
Having worked on two books about Gouda, my tip would be to come here. It is a great place to spend a day.

Tell us something surprising you’ve found out about the Netherlands
Social engagements are planned months in advance! What happens when you don’t feel up to it on the day itself? The Dutch are such pragmatic people!

If you had just 24 hours left in the Netherlands, what would you do?
Although I am a night person, I would get up early to take a meditative walk in a calm and beautiful Gouda city centre. Later I would have lunch with friends in the square overlooking the medieval city hall, before going to Amsterdam to wander its cosmopolitan streets, have a couple of drinks on a canal and dance away the night in a drum and bass club. The best of both worlds!

Vinita Salomé is co-author of two books about Gouda, The Bees Tour with Vinita and A Sample of Gouda.