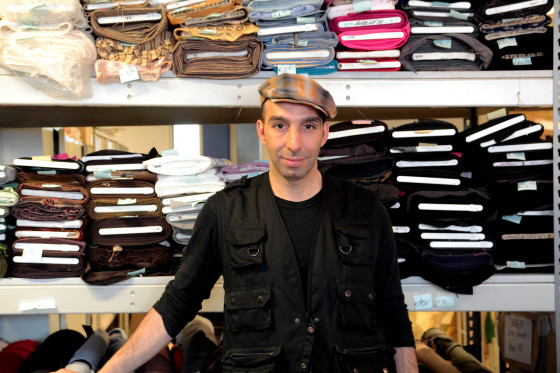 You might think renowned Dutch-Moroccan designer Aziz Bekkaoui would be more at home in Amsterdam’s luxury shopping district around the PC Hooftstraat than an old school in Amsterdam’s much maligned 1970s overspill. Natasha Cloutier paid him a visit to find out why he’s opted for Nieuw-West.

This January, Aziz quietly opened a pop-up store and a gallery in Lola Luid, a former school transformed into a pop-up mall, which features a café, shops and galleries of local artists, as well as a 350-seat theatre from the 1950s.

While the prize-winning designer’s gallery is on the ground floor, he can be found a few days a week hanging out in the basement where the school used to have its canteen: Aziz sells designer clothes and fabric at bargain basement prices in an actual basement.

His pop-up store features many collections made for opera, dance, television, film, videos and fashion shows. There is men’s and women’s clothing with nods to different decades, imported vintage from New York City, and lots of his own creations. You can also buy leftover fabric from many of his flamboyant opera costumes and exhibitions, as well as hats, belts and shoes.

‘Many aspiring designers, professionals, students and fashion fans come here and grab stuff and create things with me. Many of them were told by their parents that they needed a “serious career” like becoming a lawyer or a doctor, and so they come here to draw and play with fabrics,’ he says.

Aziz tells the story of a local girl who came to him once with a book full of fantastic sketches. She had a serious job, but showed Aziz drawings she usually kept to herself. It bothers him that someone with talent was raised to believe art is not a proper career choice.

As a successful designer and former admissions panel member of the Art Academy of Arnhem where he graduated, hearing about talented people being dissuaded from becoming a designer helps explain Aziz’s strong desire to connect with anyone interested in his craft.

‘I don’t dictate fashion,’ he says. ‘Fashion needs to be accessible and have a social component.’ Connecting with people is also something he finds easy to do in Nieuw-West. Lads kicking a football outside in the old schoolyard often peer into the windows of his shop, which seems fitting. 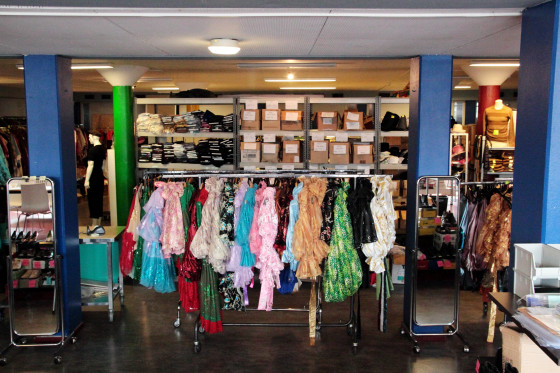 Aziz is also known as an exhibition artist, which is why he opened a gallery. In one of his 2011 projects, ‘Milk as a Metaphor’, Aziz used the incredibly efficient collection and distribution of milk back when there weren’t any fridges to explain how Dutch design came about.

‘Dutch design is clinical, unpretentious, very efficient, practical and looks great. Dairy farmers in particular have had a major influence on our time, from politics and design to society,’ he says.

Back in 2009, Aziz attracted venom with ‘The Mecca of Calvin’, an exhibition that celebrated the 500th anniversary of Calvinism in Dordrecht. ‘I once read that the Mecca of gambling was Las Vegas, so I turned Dordrecht into the Mecca of Calvinism and linked Calvinistic characteristics found in many forms in ancient times, centuries before the birth of Christ, which also include Islam,’ he says. ‘Some people were offended because they chose to ignore their own history.’

Aziz, who moved to the Netherlands at the age of six, had Bible and Koran lessons as a child, the latter with the father of Rotterdam mayor Ahmed Aboutaleb. He is well-versed in both, probably better than many of his critics.

With an established studio and shop in the Jordaan and a fashion brand known throughout the European fashion world if not beyond, Aziz specifically chose Nieuw-West as a location to showcase all the extra fabric and costumes he accumulated over the past 20 years.

However, bad press continues to overshadow the many new developments from housing to art that happen there. Local Ukrainian entrepreneur Anna Stolyarova of the Street Art Museum observed that ‘when you pick up a map of Amsterdam, Nieuw-West isn’t even on it – they cut it out’.

‘Most critics haven’t been to Nieuw-West recently,’ explains Jeroen Mirck of political party D66. ‘Gentrification is really transforming this neighbourhood and young entrepreneurs are anticipating these new consumer groups.’

If Nieuw-West can attract the likes of Aziz, maybe it’s time to explore this lesser known, up and coming part of Amsterdam and stop dismissing it out of habit. Visit Aziz and Lola Luid in Nieuw-West before it gets too popular. It wouldn’t be the first time this happened in Amsterdam.