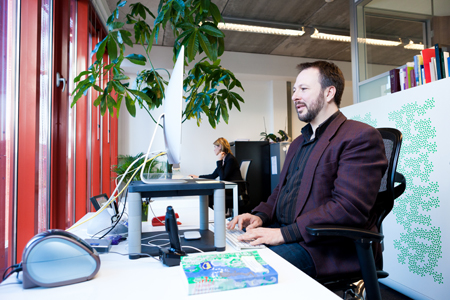 This Friday, lawyer Jeremy Bierbach will be in court in Utrecht to hear the verdict in his seven year battle against a key component of the compulsory Dutch integration programme, or inburgering. If he wins, it could help fuel a significant change in how the controversial programme is administered.

Years ago, an American known as ‘P’ and a New Zealander known as ‘S’ were shocked when they received letters from their local councils informing them that they were required to take exams to prove they were properly integrated into Dutch society. Both had permanent residency permits and assumed they were exempt from the programme. Uncertain of how to handle the situation, they went to a forum on a popular website for expats in search of answers.

There the duo, whose full names remain secret due to Dutch legal stipulations, encountered a group of people just as confused as them and grappling with their own inburgering obligations. That’s when attorney Jeremy Bierbach spotted their posts and decided to investigate their claims further.

‘P said that she just got permanent residency and asked “doesn’t that protect me?”‘ Bierbach told DutchNews.nl. ‘So I looked up the relevant EU law. It’s Directive 2003/109 and it says that you have to treat people with this status equally to citizens of the host member state in X, Y and Z ways. That’s when I realised that there was a case to be made here.’

Pittsburgh native Bierbach had recently received a master’s degree in constitutional and administrative law from the University of Amsterdam and had begun working towards a career as a lawyer.

‘P came to me because she was scared,’ Bierbach said. ‘She told me she was afraid she would be deported and that her resident permit would be taken away. Legally, that’s not true.’

P had been married to a native Dutch citizen since 2001 and was living in Breda. S, whose case Bierbach took on later, had moved to the Netherlands to live in Amstelveen and work for a Dutch company. After reviewing their situations, Bierbach decided to take on their cases.

‘The spirit of the directive means that you have to treat long-term residents the same as Dutch citizens,’ Bierbach said. ‘You can’t force Dutch citizens to inburger. The government has tried in the past, believe me. The original editing of the inburgering plan made it compulsory for Dutch citizens of foreign origin to pass the exams. You can’t do that though; it’s a violation of equal treatment. One of the core values of citizenship is equality. You have to treat all of your citizens equally.’

With this argument as the basis for legal action, Bierbach began what would become a lengthy voyage through the Dutch and European legal systems. He began by filing an administrative objection with Breda and Amstelveen councils. Bierbach submitted the objections, which would give the councils a chance to reconsider before starting legal action, in each city.

In the years that followed, they faced numerous hurdles, setbacks and the glacial pace of the appeals process. Amsterdam’s district court devoted a considerable amount of time to S’s appeal but ultimately rejected it, ruling that it was without merit. Breda’s district court, meanwhile, tossed out P’s case after only a minimal amount of consideration.

Undaunted, Bierbach was able to merge both of his clients’ cases into one and take it to the Centrale Raad van Beroep, the highest court of appeal in the Netherlands for administrative and social security claims. Because his clients had based their case on the dictates of an EU law, the judges there decided they couldn’t reach a decision without input from another authority. They turned to the EU’s Court of Justice for its input.

‘The Centrale Raad van Beroep decided that it was a very important question that they couldn’t answer on their own because EU law really isn’t clear on to what extent you have to treat someone equally,’ Bierbach explains. ‘The European court is there to explain and interpret EU law to courts in member states. So the Centrale Raad van Beroep went to them with questions about to what extent we have to treat people with permanent residency status equally to Dutch citizens and to find out if they can be fined for not taking the exams.’

In June of 2015, nearly seven years after Bierbach first met with P and S, the European court decided, in principle, that it was permissible for the Dutch government to impose fines on long-term residents like them for failing to pass integration exams.

However, it also suggested that the Dutch government’s methods of enforcing the exam is a violation of Directive 2003/109. The court said the fines may be unreasonably expensive and that the programme doesn’t take personal circumstances of individuals into account.

What could this mean for residents in the same boat as P and S? That remains up in the air. On May 27, the Centrale Raad van Beroep will issue a final decision on the case in the light of the EU court’s ruling, and taking P’s and S’s personal circumstances into account.

‘This is the final round for the case involving P and S,’ Bierbach said. ‘I don’t dare to predict what the decision will be.’

Hundreds of other people are waiting for the verdict with interest and the implications will be far-reaching. ‘I’m sure this is something the court is aware of,’ Bierbach added. ‘They don’t want to be overloaded with a zillion other cases. They want to make a broad decision that satisfies people.’

Since Bierbach decided to take on these cases back in 2008, S has, ironically, become an EU citizen through other means. She was born in Yugoslavia in a region that later became Croatia, which is now a member of the EU and then emigrated to New Zealand. While S currently lives and works in France, her case lives on back in the Netherlands.

‘She has the right to a judgement and to find out whether or not the decision the council made was wrong,’ says Bierbach. ‘And if they have to repay her legal costs.’