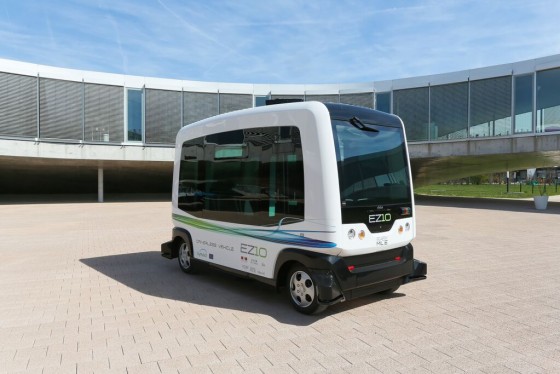 The Netherlands is flat and has a lot of straight, overcrowded roads, so it is perhaps hardly surprising that the government has made experimenting with driverless vehicles a central part of its infrastructure policy. Google may plan to eliminate the need for drivers within five years and Tesla has a three year deadline but the Dutch want to play a leading role as well.


Two years ago, Amsterdam’s A10 ring road was the setting for a test of self-driving cars, developed by the TNO research institute and scientists from Delft University. The aim of the Dutch Automated Vehicle Initiative (Davi), which also involves the transport ministry, is to develop a user-friendly system which can be built into new and existing cars.

Then this January, ministers approved the large-scale testing of self-driving cars and trucks on public roads in the Netherlands, arguing the technology could cut jams, improve road safety and reduce pollution. The cabinet wants the Netherlands to take a ‘leading role’ in the development of self-driving cars and systems to allow vehicles to communicate with each other.

Since then the transport ministry has been busy looking at the ethical ramifications of automation, registration, liability questions relating to insurance and revisions to the 1968 Treaty of Vienna which governs EU traffic laws.

There is a sense that everything is moving very fast and ‘more tests are planned, though there are no concrete dates yet’, transport ministry spokeswoman Marianne Wuite told DutchNews.nl.

Delft University professor Riender Happee, who is closely involved with the Davi project, said funding so far is going towards tests on the quality of radar and cameras, human-machine interaction on the road, and work on online platforms for the detection of damage to sensors and bad weather.

‘Very rapid steps are being made towards safe integration, at low speeds, with all kinds of traffic,’ he told DutchNews.nl. ‘In the future, every self-driving car will itself know exactly which roads it is allowed to drive on and at what speed.’

Eyes on the road

Despite the government’s enthusiasm, public scepticism and anxiety around automated vehicles does remains high. When Tesla was given the green light to roll out its autopilot software in the US this October, road safety experts in the Netherlands were quick to test it out for themselves.

The Dutch vehicle licensing authority (RDW) concluded the upgrade – more improved ‘driver assistance’ capability than ‘autopilot’ – should be allowed on roads here, meaning the 2,000 Dutch Tesla S owners will be able to use it immediately.

‘We have different rules here than in the US and over 60 different safety points that vehicles have to meet,’ said spokesman Hans van Geen Huizen.  ‘Many of these cruise control and automated parking functionalities are already in other brands such as BMW and Mercedes-Benz as well as the earlier version of the Tesla.

‘What is new is that the Tesla can now indicate when you should change lanes or overtake and no other car has that functionality. It is a steering support system not an ‘autopilot’ and you definitely still need to keep your hands on the wheel.’

Over at Dutch motoring organisation ANWB, they’re watching developments with a keen eye.

‘We are satisfied with the ambitions and the role the Dutch government and Dutch companies are playing within this field. When compared to other European countries, and especially considering our relative size, we’re punching above our weight,’ said spokesman Markus van Tol.

In Gelderland, trials using a French autonomous vehicle known as the EZ10 to run passenger services on public roads are poised to begin in January. The Wepods project is a joint venture between the province, Delft University, the TNO research institute and others.

Unlike previous tests in Finland, Switzerland and France or similar driverless buses like the Rotterdam Rivium Shuttlebus, the vehicles will be operating on public roads for the very first time, carrying up to six people between Ede and Wageningen.

The Wepods have no steering wheel or brake pedal, a top speed of 25km and can be hailed with a mobile app. Though there will always be someone in charge of the emergency stop mechanism, the idea is to explore the possibilities for passenger vehicles with no driver at all.

‘The Wepods are a whole new ball game for us,’ said RDW spokesman Arjen van Vliet. ‘We need to take interaction with other road users into account. We’re consulting with a traffic psychologist on that. There’s a very rigorous exemption process for such projects. It’s an interesting time.’

Delft University’s Happee says the Davi programme is linking together many national and international partners. ‘There are many differing opinions as to when fully autonomous vehicles will become commercially available, but the technology is close,’ he said.