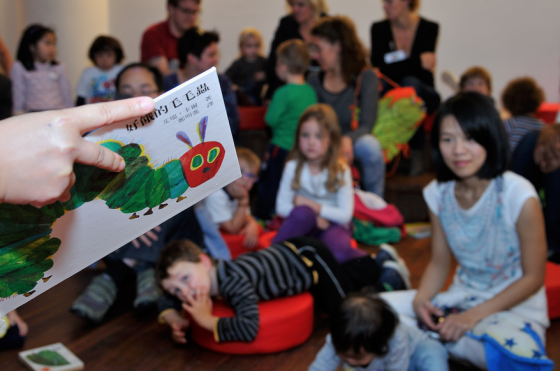 Boasting over sixty stand holders, key note speakers from all corners of the world, and children’s activities, the fourth Drongo Language Festival took place in Utrecht this weekend. Esther O’Toole went along to take a look.

The Drongo Language Festival started in 2012 as a small event, at Amsterdam central library, on a rainy Wednesday afternoon. When over four hundred people turned up the organisers knew that they were on to something.

Maaike Verrips, the festival director, talks about language so passionately it’s easy to see how her contagious enthusiasm kick-started the festival. Placing language in a wide context of culture, science, business and technology, she emphasises the many varied ways in which it is relevant to our daily lives, and how it makes them better.

‘What I like best about Drongo is that it brings together a wide variety of people who love language. A wide variety: singers, translators, language experts, businesses. They never get to meet each other except at Drongo and here they get the opportunity to look into each other’s house, as we Dutch like to do. It’s a chance to meet the neighbours!’

The organisers have taken a conscious decision not to focus on one aspect of language exploration but to keep the scope broad and so ‘stimulate and motivate’ the cross pollination of ideas.

Introductions to key note speakers were made by Zora, the humanoid robot developed by Belgian company QBMT for use in health care, which speaks nineteen languages. The speakers’ varied radically, from Mamokgthi Phakeng, a maths professor dealing with the complexities of teaching in nine South African languages, to Mark Lesun, the localisation expert from Google.

‘I’m here out of pure curiosity. It’s not to do with work. I’m interested in the variety the festival has on offer. All different aspects of language learning and investigation are here,’ says Nell Van Otterdijk.

Some visitors had come to attend lectures and language crash courses, such as Rachel Rubin who studies linguistics at the University of Leiden: ‘I’m originally from the States and potentially want to teach English here so I’ve come for the resources.’

The event is not all serious and academic. There were hands-on activities like rap workshops and testing yourself in the EU translator cabin. For those who are more theoretically minded, the festival was host to the first ever specifically language orientated Researchers Night in the Netherlands, including: live language experiments, readings, workshops and speed dating.

Odette Scharenborg, a researcher at the Radboud University, and PhD student Polina Drozdova led games and quizzes to do with speech perception. ‘The idea is to entertain people and let them know more about what language really is. We take it so for granted’ Scharenborg says. ‘I love bringing our knowledge to the general public. Maybe we’ll attract a few new students in the process.’

Other stand holders were more actively recruiting, with translation agencies on the look-out for new freelancers. It was tangible how new technology’s effect on the globalisation of work has made for huge and rapid growth in that sector.

European Commission official Hugo Keizer said they too are always looking for new colleagues.‘Getting to work as an official is a bit of a hurdle,’ he said. ‘So, we’re here to promote multilingualism, transfer knowledge and let people know how it is to work at EU institutions.’

Even the members of Esperanto Nederland were hoping to draw new people to their cause. ‘First off we want to let people know we exist!’ said Ronaldo Nobel. ‘Then, we want to show them the egalitarian aspect of Esperanto and that we have our own version of couch-surfing!’