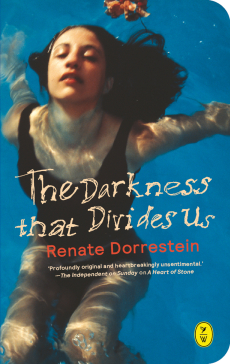 Born in Amsterdam in 1954, Renate Dorrestein began her working life as a journalist for the Dutch magazine Panorama. Her first novel Buitenstaanders (1983) became a bestseller and marked the beginning of an industrious career in literature. Dorrestein has published more than 30 fictional and autobiographical books, some of which have been translated or made into films – gaining her international recognition as a writer of merit.

Dorrestein’s collection of work was awarded the Annie Romein Prize in 1993. She won the Vondel Prize for Translation for her novel Heart of Stone and was nominated for numerous literary prizes including the Libris Literature Prize for Een Sterke Man (A Strong Man) and the AKO prize for Zonder Genade (Without Mercy).  Dorrestein has twice written the national Dutch Book Week complimentary book, in 1997 and 2008.

The Darkness that Divides Us

Initially published in 2003 as Het Duister dat Ons Scheidt, this recently released version was translated by Hester Velmans and is available to English readers as The Darkness that Divides Us.

The novel is a family drama infused with mystery. The book is divided into three parts, with each part covering a six-year period. The 26 chapters are titled with a letter of the alphabet, beginning with ‘A is for Abacus’ and ending with ‘Z is for Zeal’.

The storyline revolves around a Lucy, a Dutch girl who spends her early childhood living in a rectory with her artist mother and their two male boarders, Ludo and Duco. A tragic crime is committed, resulting in Lucy’s mother being sent to prison and six-year-old Lucy experiencing a drastic drop in popularity with her peers. Her childhood in this idyllic Dutch village becomes an ordeal when the children commence a constant regime of bullying.

In Part Two Lucy’s mother is released from jail and returns home. The local community is unwilling to allow her re-entry into the life she had prior to her incarceration. Lucy too is unable to reconnect her relationship with her mother, preferring the company and guidance of Duco and Ludo. Seeking a panacea to their domestic unrest, the four escape to a life of anonymity on the island of Lewis in the Outer Hebrides. Here Lucy is given the chance to reshape her childhood with the island children.

The final part of the book focuses on Lucy departing Lewis and the care of her guardians for Amsterdam where she plans to live independently and attend college. Her resolution disappears upon seeing someone from her past. She quickly slips into a funk, unable to leave her room. A meeting with her mother in the final pages resolves the mystery that has been weaved throughout the narrative, shaping the lives of the main characters.

Dorrestein doesn’t write about beautiful people. She refrains from sentimentality in her character descriptions, choosing instead to expose their flaws. These negative attributes are easily identifiable in the general populace. The children in the book may be adventurous in their antics, yet in general, are written as nasty, dirty, destructive bullies. Adult characters are devoid of empathy and driven by their own insecurities.

The plot holds tightly together, tempting the reader further to uncover the secrets hidden in later pages. The translation of this narrative of complicated interpersonal relationships is the work of an extremely skilled translator in Hester Velmans. The Darkness that Divides Us succeeds as an English language novel and is highly recommended.