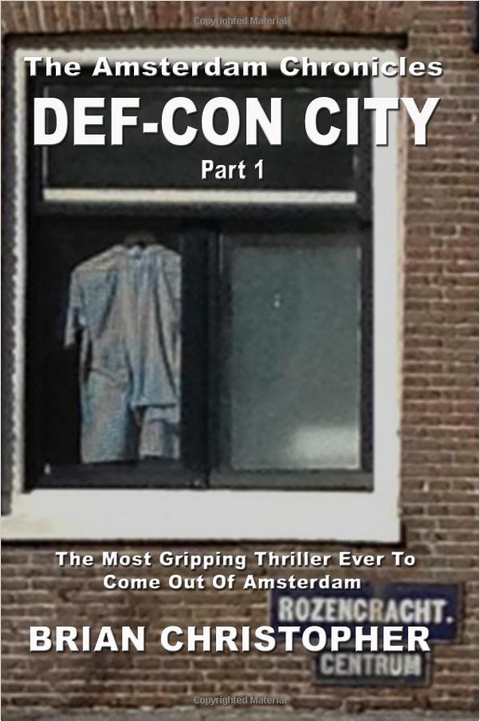 The Amsterdam Chronicles: Def Con City is a trilogy of crime novels by Irish writer, Brian Christopher, with Part 3 published in January this year. As the title suggests, the novels are set in Amsterdam – where good and bad guys run amok along the canals encircling the famous city centre.

Harvey Wall is a homicide detective sent from the New York City precinct to the Amsterdam police on a six-month work exchange. His background is somewhat murky, and hints of him acting as a sole operator outside the confines of police procedures.

Arriving in the Netherlands, Harvey outsmarts the two Dutch detectives sent to welcome him at Schiphol, dodging them to enter the city on his own terms. Before even setting foot in his guest precinct, he has detained three thieves and acquired himself a reputation for being slippery and brazenly unorthodox in his professional conduct.

To the mirth of his new colleagues, Harvey is partnered with his antithesis Frank Bakker, ‘… a born-again hippie in his early thirties whose greatest pleasure in life was catching criminals’ and eating stale pizza slices found in his desk drawer. This unlikely pair make for a successful police duo.

When two unusual deaths take place on the same night within the same neighbourhood the police and a pathologist are called to investigate. More deaths follow in quick succession, expanding the crime scene to encompass recognisable Amsterdam neighbourhoods including Rembrandt Park, Kinkerstraat and the area around the Concertgebouw.

The murders are creative and the culprit is endowed with specific powers akin to those of minor superhero characters. Links to the streets are included in the electronic version of the book for readers keen to follow where the action is taking place via Google Maps.

The narrative is tight and fast-paced keeping the reader turning pages until the end. Occasionally there is a dip in credibility due to the use of character stereotypes, which do add colour to the story but are (hopefully) inconsistent with real Dutch police personnel.